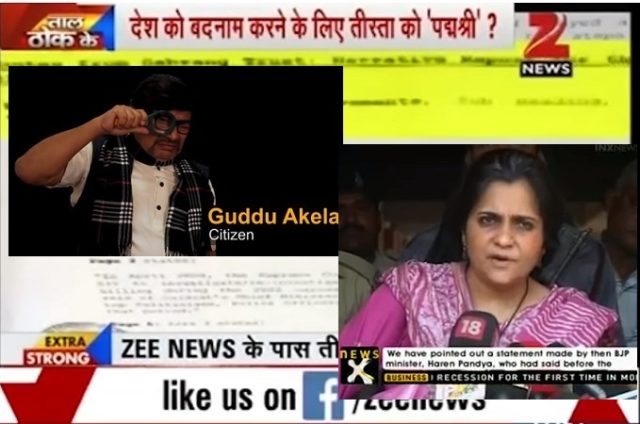 I am often accused by proponents of militarised and political faith, of being “anti-Hindu” or a “Hindu-hater”. This is then propagated by certain sections of the media. However, I have deep respect for all faiths including Hinduism. So here are 11 Hindus who inspire me.

I look up to the Mahatma who drew strength from his Hinduism and the spirituality of Christianity and Islam, who carried compassion in his heart and was able to communicate to survivors of brute violence during Partition that revenge and reprisals were and are not the answer to even the loss of your own child.

On March 7, 2006, a week before the festival of Holi could be celebrated in the city of Varanasi, twin bomb blasts rocked the mystical city on the banks of the Ganges and sent resounding shock waves throughout the country. Two persons were killed when a bomb exploded at the Varanasi Cantonment railway station. Another bomb, which killed 21 worshipers, was planted within the precincts of the Sankat Mochan temple, a temple devoted to Lord Hanuman and to whom the devout offer special prayers on Tuesdays and Saturdays. But Dr Veer Bhadra Mishra, the Hindu mahant of this 410 year old temple, nixed any efforts to reap vengeful benefit from this tragedy and sent out, instead, a message of deep restraint and calm. What followed from this were unique and healing images, and messages of Hindu-Muslim unity that effectively frustrated the designs of those hoping to precipitate a communal bloodbath. I find Mahant Mishra truly inspirational.

The award winning film Ram Ke Naam, records the meeting of Applicant 12, on October 30, 1990 with Pujari Lal Das, who was a strong proponent of tolerance and dialogue, a Hindu priest who had received death threats. The Uttar Pradesh government had provided him with two bodyguards. He spoke of the syncretic past of Ayodhya and expressed anguish that Hindu-Muslim unity in the country was being sacrificed by people who were cynically using
religion. He predicted a storm of mayhem that would follow but expressed confidence that this storm too would pass and sanity would return. Pujari Laldas’s predictions of large-scale violence in the region came true. A year later, a tiny item on the inside pages of The Times of India noted, “Controversial priest found murdered.” Pujari Lal Das had been killed with a country-made revolver. The newspaper article never told us that the real “controversy” was the fact that this brave priest believed in a Hinduism that is the mirror opposite of divisive intolerance. His killers have remained unidentified and unpunished. I believe everyone can draw inspiration from Pujari Lal Das’s life.

A voice of the 800 KP families stoically living on in the Valley who believe that their future lies in the land of Kashmir: its water, river and mountains fuel their soul. They live in hardship caught between the rock and a hard place, often escaping the human rights discourse because of the violations by security forces against ordinary Kashmiris. He and his organisation were one in demanding the release of journalist Khurram Pervez a few months ago. Celebrations of Dussehra and Holi carry on within the Valley thanks to these braveheart Kashmiris. I think Tickoo ji is an inspiration to us all and CJP works closely with KPSS.

Dr. Girishbhai Rawal, 82-years- old in 2003 would have been 96 years old today. A singularly brave man with compassion in his heart. Sudhabehn (76), his wife died a horrible death in Godhra, by burning and asphyxiation. “When you are young, there is romance and desire,” he told me, “but when you reach our age there is something more precious. There is harmony and sharing. I have lost the harmony of my existence,” he said, as tears rolled down his weathered cheeks for the first time as he attended the CJP press conference in Mumbai on Dussehra Day in 2003. Girishbhai faced a second tragedy soon after losing his precious Sudhabehn. On April 16, 2002, he lost his 42 year old son Ashwinbhai Rawal. Ashwinbhai, the local Bajrang Dal chief, was stabbed to death in a communal killing in Ramol. Dr Rawal, in his cogent and articulate affidavit filed in the Supreme Court of India, has clearly stated that the failure of the VHP-BJP to bring back the yatris safely had to do with the intemperate and abusive behaviour of the kar sevaks on their way to, and while returning from, Faizabad-Ayodhya. He has also clearly stated that under the current regime in Gujarat, the chances of free and fair investigation and trial are remote; unless the trials are shifted outside of Gujarat, justice will not be done.

On the night of December 7, 1992, a small lane in Kurla saw this buxom Maharashtrian woman save the lives of several families living in a solitary building where Muslims lived. She stood before her son, a Shakha Pramukh (Bharat Khavnekar) leading an unruly, even drunken mob, and dared him to attack the residents over her dead body. Faced with the moral force of his mother, he slunk away. The terrified residents were not just grateful but recounted this narrative to me on December 8. I reported it, with Vimlabai’s photograph in Sunday Observer.  Vimlabai was given the Mayor’s Medal for bravery thereafter. She is a Hindu, true to her faith.

On October 26, 2001, communal violence spread in and around Malegaon, Maharashtra after Muslim protesters asking for the boycott of US goods following the attacks on Afghanistan was fired upon by the police triggering off a spiral of violence. Some inured Muslims took shelter in a local hospital. The medical officer-in- charge, Dr. Surekha Totla (then just 32), a resident of Erandol, and her staff at the hospital had witnessed the entire gory drama — the attack on the group of Muslims, the torching of the jeep right in front of their hospital and its occupants’ fortunate escape. She had personally informed the Malegaon police who expressed inability to rush forces to Dabhadi since Malegaon itself was in flames. Dr. Totla issued instructions that the entrance to the hospital be locked from inside and that those among the staff who were asleep be woken up immediately, she herself attended to the medical treatment of the badly injured Muslims. The good doctor and her entire staff stayed awake the whole night, keeping a close watch over the injured patients. Later in the night, two police constables arrived in Dabhadi and dispersed the mob. For three days Dr Totla and her team of nurses — Ms. RT Mali, Ms. PM Jadhav, SL Sudhan, MA Borse and MS Kote — took care of the medical needs of the Muslims, ensured their protection and brought them food cooked in their own homes as a mob would gather outside making it impossible for them to release even those patients whose treatment had been completed. Dr Totla and her team are Hindu heroes.

He is one of the bravest whistle-blowers from the Gujarat 2002 genocidal carnage. His affidavits before the Nanavati-Shah Commission have provided fodder for the evidence used in cases related to 2002. A devout Hindu, once in uniform Sreekumar swears by only one holy book: the Indian Constitution. His words from Communalism Combat : “An ancient Sanskrit text, Nitisara, classifies all human beings into two categories: wise men and fools. Wise men are those who spend their leisure time in the study of science and the appreciation of arts and literature. Fools, on the other hand, utilise their free hours for pursuit of addictions, quarrels and sleep.
“Kavya sastravinodana
Kala Gacchati Dheematam
Vyasanana cha Moorkhanam
Nidraya Kalahena”

A Judge of the Bombay High Court who rose to become a judge of the Supreme Court of India and was author of the Srikrishna Commission Report into the post Babri Masjid demolition violence (December 1992-1993), Justice Srikrishna was a Sanatani Hindu whose visit to the Matunga temple every Monday is well known.  He ended his report with this ringing exhortation of Shankaracharya:

“Tvayi Mayi chaanyatraiko Vishnuh, Vyartham kupyasi mayyasahishnuh (The same God resides in you and me; why then be needlessly angry with me). The voluminous evidence produced before the Commission strikingly brings home the stark reality that the beast in man keeps straining at the leash to jump out; frictions, irritations and disputes based on colour, race and religion are but excuses. The commission has noticed that most of the violent communal riots during December 1992 and January 1993 took place in areas called Prem Nagar, Shanti Nagar, Gandhi Nagar and so on.” ((Epilogue to Chapter VII of the Srikrishna report submitted to the Maharshtra
government on February 14, 1998))

In March 2001, Shastrinagar, Kanpur was a Hindu dominated area, with just a sprinkling of Muslims. Tension was brewing after the murder of ADM Pathak. Laxmidevi Sonkar (40) is the municipal corporator of ward No 10. When trouble started brewing on the March 16, Sonakar, her husband Om Prakash (48) and advocate Saeed Naqvi got into action. Sonkar’s ward adjoins Sisamau ward, where the family of slain ADM Pathak resided. Some fanatical elements in Sisamau instigated a mob to advance towards Bashirganj, a Muslim enclave in Colonelganj ward. They were armed with country made pistols, bombs and sticks. However, Laxmidevi, her husband, and several other fellow-Khatiks from the area made a human wall to prevent the mob from entering in. The Khatiks were unarmed, but seeing their solidarity and resolve, the threatening mob retreated, and no untoward incident took place. It was a powerful manifestation of human solidarity. I salute Laxmidevi Sonkar.

Often regarded as the father of the Hindu Renaissance, Roy was an outspoken votary for widow re-marriage, stood firmly against the barbaric custom of sati and campaigned hard to get inheritence rights for women. Roy’s reform movement essentially gave the life and worth to the Hindu woman the respect it deserves. He was the founder of the Bramho Samaj movement that aimed to bring about reforms in religious, socio-cultural and political spheres. 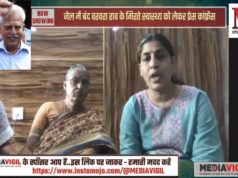 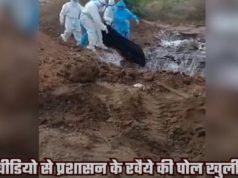 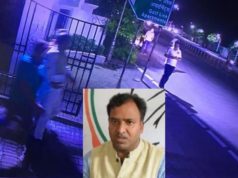